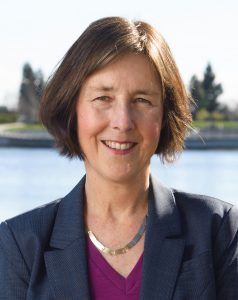 California state Senator Nancy Skinner, D-Berkeley, is the chair of the Senate Budget Committee, is Senate Majority whip, and is vice chair of the Legislative Women’s Caucus. First elected to the Senate in November 2016, she represents California’s 9th Senate District, which includes the cities of Oakland, Berkeley, and Richmond.

A social justice advocate, energy and climate change trailblazer, and a champion of criminal justice reform, Sen. Skinner also served three terms in the state Assembly. As budget chair in the Assembly, she oversaw the largest funding boost to childcare and preschool in over a decade; an increase in state support for our CSU and UC systems; a reduction in the number of juveniles incarcerated in state facilities by half; and the creation of a new dedicated fund to reduce prison recidivism.

Sen. Skinner also took on the Gun Lobby, successfully passing two groundbreaking gun violence prevention measures. To get corporations to pay their fair share, Skinner authored the bill that requires Amazon and other internet retailers to collect sales tax, which is now bringing in a $1 billion a year in new revenue to support vital services for California families. An environmental and climate protection champion, Skinner carried measures that doubled rooftop solar and renewable energy.

In the state Senate, Sen. Skinner authored two landmark criminal justice reform laws, opening up police misconduct records for the first time in 40 years and overhauling California’s unfair felony murder rule. She also has authored laws to allow California college athletes to get paid for their talent and hard work, to address the state’s housing crisis, and to protect the environment and cut greenhouse gas emissions.

A graduate of UC Berkeley with a BS and an MA, Sen. Skinner co-founded the labor union representing graduate student instructors and was a leader in the UC South Africa Divestment movement. Sen. Skinner began her public service in 1984 as the first and only student to be elected to the Berkeley City Council. On the council, Sen. Skinner introduced the nation’s first Styrofoam ban and co-founded an international association of cities, ICLEI-Local Governments for Sustainability, to address climate change.

Sen. Skinner is also a past member of the East Bay Regional Park District board, a former small business owner, and an advocate to increase the number of women in elected office. She is a 40-plus year resident of Berkeley.